Yes, you read that correctly.  In all my years updating my blog for posterity’s sake, I’ve never mentioned a vacation, and that’s because there hasn’t been one, in like 16 years.

And yes, you read that correctly as well.

With the new-ish job (that one I’ve been in for a little over a year now), I learned I got vacation pay.  What?!  I haven’t had that in ages, and it wasn’t even a thought it was available to me.  Side note, if I ever really paid attention to my paychecks, I would’ve seen the accumulated vacation time.  Second side note, I don’t consider little weekend or even week-long getaways to visit family or friends “vacation”.  Sometimes, that’s more work than work.  And remember last year, when The Sis and I went to LA to visit our family, and my new car got broken into and all our stuff was stolen…yeah, good times.

So I decided to spend some of the savings I had been hoarding like Smaug and treat myself to an actual getaway.

The Sis and I talked about where we’d like to go, what we’d like to do and see, and initially, our plans led us to Disney World in Florida.  But goodness is that an expensive trip.  And it sounded like too much work.  All that walking and being around people.  No.  I wanted peace and quiet and solitude and lethargy.

Hello, Hawaii!  It’s been a while. 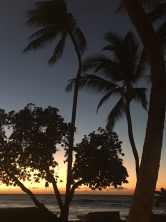 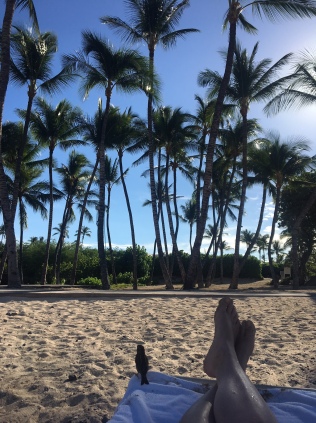 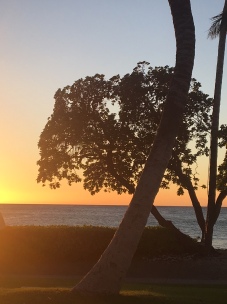 Yes, that is a lot of sunsets.  We watched it every night.  It was entrancing.  Because of the way we were situated on the island, we never saw a sunrise, although because of the time change, I was up with it almost every morning.  That was weird.  It also gave me an opportunity to watch a lot of random television.  I’m finally finishing The Office.

It was hot and humid most days, so we pretty much just floated in the ocean or the pool, had pina coladas for breakfast and mai tais for lunch.  We ate very little, because of the heat, so that saved on cost. 😉

We discovered at a neighboring hotel during an off-property excursion that we were actually staying at the same hotel we had stayed at 27 years before on a family vacation.  With my memory, and the fact that The Sis was only 4 then, it was understandable that we didn’t remember it.  In my defense, at least partially, the hotel had changed names.

So, a few things to note as a reminder to myself in the years to come – our rental car was an upgraded version of my current car (made it easy to drive), I wanted to bring home that itty bitty, teeny weeny gecko that visited our balcony, birds flocked to us as if we were Snow White, we saw endangered green sea turtles (there was a reserved spot on the beach for them to rest), a large manta ray, 16th century petroglyphs (the last photo above), and finally it was on this trip that an attempt to eat fish, because, hello, we’re in Hawaii, finally made me turn a corner from a sometime pescatarian to a full on vegetarian because that fish did not like me.

It was a nice getaway, long overdue and not long enough.  Nearly the moment we returned, I was thrown back into work, full force, and the vacation quickly became a distant memory.  So I guess the only way to get another “fix” is to plan another one, and not let so much time pass before we explore another amazing piece of this big world.