I had planned on writing these last weekend, but it wasn’t until my Thursday night writer’s group I actually sat down and did anything with them.  I’m doing my best to keep them under 200 words, and without a lot of forethought or editing.  They are what they are.

Again, if you have been inspired to write/create anything from any of the writing prompt images, please share! 🙂 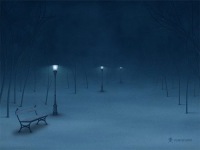 It was bitterly cold.  The air was heavy and dimmed the street lamps that lined the park.  He could barely see the bench less than ten meters away.  The spot was well chosen for a clandestine encounter.  Anders pulled his coat up around his neck and ears, his breath a thick cloud.  A shape seated on the bench became visible.  She was early.  He strained his eyes and ears in vain.  There was nothing but silence.  The figure on the bench did not move, and as he drew closer was able to see that it was slumped over.  He made one final full turn to take in the scene before kneeling before her.  Her breathing was shallow, and her hands were interlaced with blood from the wound in her stomach, but she still smiled weakly when she saw him.  Anders ran his hands over her face, his heart racing.  “I’m sorry, “ her voice was just above a whisper.  She pulled her coat aside to reveal that she had been wired, and the time was almost up.  She pushed him with what little strength she had left and said with all the emotion she could muster, “Run.”

Sabine was growing accustomed to life in her new home; the estate was beautiful, the people were kind, and she had duties enough to distract her, and yet her loneliness would not subside.  He had been gone longer than expected, and no word had been sent.  In order to maintain the household she would have to keep up appearances and only voice her concerns to the wind.  Every day she would walk up to the tower where the view was incomparable; she could not only see the bay where the ships would dock, but also the vast ocean beyond.  She could spend hours there, admiring the view, watching the interactions of the villagers below, and keeping an eye out for the one ship she longed to see again.  It was here she would make a wish, one she dared not speak aloud, and one she had not ever thought to make.

She had been riding her horse past the house for months, and had never seen anyone come or go.  She found it odd considering the state of the manor, it was well maintained.  Her father said the house had been abandoned years before.  In the winter months, as the night came earlier each day, lights within created a warm glow.  She found herself lingering longer each time she passed in the hopes of seeing someone, but she never saw anything, not even a shadow pass the window.  As spring arrived and the weather turned suitable to ride again, she decided she would have a look inside the manor and discover what mysteries might lie within.  It was on that day as she drew near, a cold breeze blew in bringing dark, looming clouds.  As she led her horse closer, she caught a glimpse of a face in the window.  It smiled then disappeared.  A moment later, the door opened.

Have a great weekend everyone!! 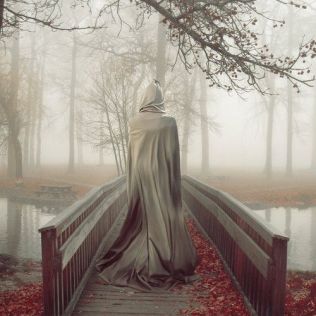