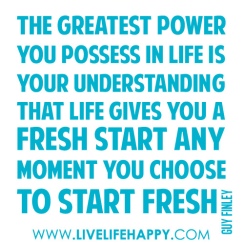 It’s a new year!  Still can’t get over that.  As I mentioned in my New Year’s post, I’m not one for making resolutions.  I think that you can decide to change your life, make new goals, do something different whenever you want, and just because it’s January 1st it does not somehow magically help you decide to make the change.  You have to want to do it.

Although for screenwriters in particular, the beginning of a new year is the beginning of a new process to sending our work out in the hopes of being discovered and becoming a professional, so in that regard some resolutions have to be made early in order to be effective.  This has been a source of concern that I may lose out on another year…there are a number of factors I can lay blame upon, but the truth is, it’s my own fault for not being better prepared. 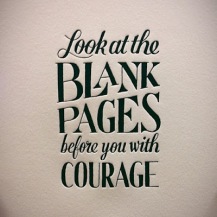 The move consumed me for a number of months, from packing and prepping to living in temporary accommodations until we found our own place, job hunting, etc. the time just escaped me and my routine was nonexistent.

The end of another year is cause for some reflection.  I have been thinking about the move and the changes that have come with it.  I’ve been thinking about the job I was so relieved to get, and how it’s not all I had hoped it would be.  Especially how it has sapped all my creative juices and I haven’t written a word on any of my own stuff since I started it.  I have had sparks of inspiration, just last night I thought of an interesting new detail to add to a rewrite – it’s nice to know things are still brewing on the back burner.

So, as the new year starts and with it a new series of goals to achieve, I offer these quotes as a source of inspiration!  (You all know how much I love a good quote.)  Try to remain positive and focus on the small improvements and steps you can take forward every day that will lead you to your bigger goal.

Let’s make this the year we do great things! 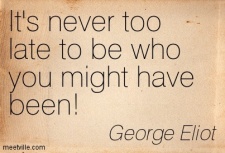