Some days I long for my childhood.  Some days.  Remember there was that thing…what was it called again?  Oh, yes.  Ignorant bliss.  Our biggest concerns were homework and whether we were getting together with our friends on the weekend, or what have you.  High school, and even college, were supposed to prepare us for adulthood, but honestly, I don’t think either of those institutions did their job properly.

I should demand a refund.

When you leave home for the first time, there’s this excitement (and delusion) about having newfound freedom, only to learn shortly thereafter that maybe, the whole adult thing, isn’t really all it’s cracked up to be.

In my college anthropology class, eons ago, I wrote a paper about how Western civilization doesn’t really have a “right of passage” for its youth.  Yes, there are the time honored marks at 16, 18, and 21, but which of any of these offer you life lessons for your future?  Where are our elders ushering us into this new phase of our lives?  I proposed a class called Life 101 where you get an overall scope of the challenges you may encounter and how to deal with them.

Perhaps if I had taken such a class I wouldn’t be in debt.  Maybe I wouldn’t procrastinate until there were (sometimes literally) minutes to spare.  Maybe as an introvert, I wouldn’t exhaust myself trying to be an extrovert because I would have learned about my options, rather than finding myself cornered into my current situation. 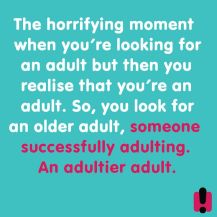 It’s all just theory, isn’t it?  Wishing that maybe we had been given the tools to live our lives better instead of just blindly meandering?  How many of those things we’d like to change are just built into our DNA?  Sometimes I look at some of my friends and wonder how they pulled themselves together.  They were once like I was.  What changed?  Maybe they haven’t.  Maybe they’re doing what I am – putting on a good show.

Sometimes I think of my life as a book someone is reading.  We’re all stories, after all.  They probably found the cover intriguing, but now, having forced themselves halfway through, they’re wishing they could put it down, but they just have to know how it ends.  They’ve probably exclaimed aloud a number of times, wishing they could just slap the protagonist, but they can’t abandon such a tale after so much time invested.

I’ve written about this in the past, and I’m bringing it up again because despite my efforts, it seems I can’t make any head way.  I’m still, months later, at that same impasse.  I’m not one to wallow, I try to remain positive, but after a while, that becomes an exhausting endeavor when there is little evidence that change is on the horizon.

So I send this out into the world and hope for the best.

And I send this out to you, my friends:  If you’ve ever made some big changes, how did you go about it?  How do you stay positive?  How do you “adult”?