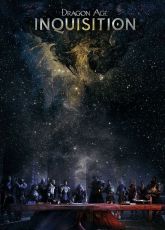 So, it’s time to continue the obsession saga series known as Dragon Age. I present to you Part 2: Creating your Character aka The Protagonist.

As I mentioned in the first part, I will discuss topics in the order they are encountered, so this post will deal with character creation and we’ll move on from there.

Character creation is one of my favorite things to do in games. If I could get paid to make characters all day, I totally would. Some games do this better than others, and I had really high hopes for this option in Inquisition given the previous games, and from early game footage we knew the graphics were going to be amazing, and for the most part it is really good, but it has its downsides.

In Origins (game 1) you were given a choice of 6 different origin stories to play through as an elf, a human, or a dwarf. Comments made in game play, and how NPC characters treated you, etc. were all based on this choice. In 2 you could only play as a human, Hawke, which many people didn’t care for (in addition to a number of other factors – we won’t go into that here – I still liked the game). There was also a DLC called the Black Emporium that allowed you to change your character’s features at no extra cost, i.e. gold or favor anytime you wished. Inquisition returns to the original format of different races and includes a fourth option, the Qunari; a race of large beings with horns, usually. You do not have an option to change features, but Bioware did try to have the character creator mirror actual game play, and it is very close.  What this means is what you see is what you get, pretty much.

The character creator allows for multiple interesting features to incorporate such as unnatural eye colors (pink, yellow, what-have-you or a combination of any along the color wheel), scars, tattoos, and even a broken nose. You could easily spend hours creating just the right eye size, nose shape, chin depth, even the height of the ears, and that’s all great, except…

Here are the downsides. There are no distinctions in hair options for male and female characters. They removed a number of the good ones from previous games (where did my cute bob with the braids go?!) and instead added 13 bald-ish options. You can go completely bald, have stubble, have stubble with a round head, or stubble with a slightly cone head, and the list goes on for 13 different options…gracious.

And let’s talk about beard options for male characters – there are like 40. C’mon now. I realize there are so many other things going on in character creation, especially having 4 races, but you took away multiple choices for one of the most essential features – hair to include all those others?

Side note, here’s a link to a video about some of the ugliest characters created, but be forewarned for explicit language. I found it hilarious!

One feature some gamers didn’t like was the lack of choice in body type. Elves are small framed, dwarves are short, Qunari are tall, and humans are well, human. There is no choice in making any character taller or shorter, heavier or thinner. You cannot create the rare tall elf, or the randomly short Qunari.

So after painstakingly creating your perfect character, choosing a voice of which there are only two across the board for any race of male and female characters, and a name which no one will ever use in game play because gaming is not quite that advanced yet, you start your game.

Depending on your race, whether you’re female or male, and depending on your class especially in this game, you will be treated accordingly in this world. Elves are second-class citizens, dwarves are generally not surface dwellers, Qunari are from a foreign land and in previous games have been referred to as an invading force trying to convert the world to their beliefs, and then there is the “ruling” class, the humans. In Inquisition, regardless of your class, you will be from a noble family, although if you are a mage, you will have come from a circle; a place where mages are kept locked away for the protection of the people.

This is the driving storyline of Inquisition due to events started in DA:2. We’ll talk about story in another post.

What makes the character creator fun, you might ask?  As a writer, sometimes I find it fun to try to create a character that might resemble one of my own creations.  If you’re really talented you can create a character that looks like someone else, like this, Nigel Thornberry.  So, after all my time spent in the creator, this was my first character, who I really liked despite her questioning eyebrows. 🙂  She does not resemble any of my imaginary friends, but after the play through, I suppose she could.  I really grew to love her and her choices, despite what some of her companions thought.

All right, that’s quite enough for one day. The Dragon Age Obsession Saga will continue with posts in regards to dialogue, companions, and story shortly.