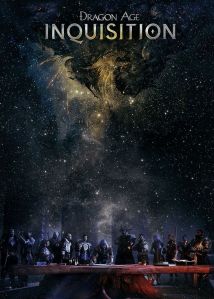 So in my absence and “sticking my head in the sand” I have neglected one of my favorite topics, Dragon Age.  For those of you who are new to my rambles, I have a particular fascination with the game series, some might call it an “obsession”, I would almost call it that myself, except I saw this…

I started this series some time ago, here’s Part I and Part II.  I’ve decided to write Part III on the companions, the merry band of misfits you recruit to join your cause.  I was trying to go in order of how one might proceed through the game, so perhaps this one should be about story, but Dragon Age is currently amidst a March Madness-type narrowing down of favorite characters to create The Dragon Age Ultimate Party, so I felt this was appropriate.  My choices, just FYI, are The Warden from Origins as the leader along with Alistair for the warrior, Varric from DA2 for the rogue, and Dorian from Inquisition for the mage.  #DAUltimateParty

So before I discuss the companions, of which I won’t go into too much, because “Spoilers”.  Any Doctor Who fans out there? 😉  Here are a few of the pros and cons.  In the two previous games certain actions were only available after a character “liked” you enough.  Their approval allowed for romance options and loyalty.  There was gift giving available and specific tokens for individuals, in addition to personal quests that would garner favor.  A bar on their character profile page gave you some indication of your friendship with them, but that disappeared in Inquisition.  At first it really bothered me, because how am I supposed to know if someone likes me enough?!  But this is more true to life.  The “so-and-so approves” or “greatly disapproves” text still pops up, so your only indication of character favor is based on how many times you’ve seen your favorite agree or disagree with your choices.

Also out for the majority of conversations is the positive, negative, or sarcastic indicator that allows you to choose how you would like to respond.  The Sis saves before every. single. conversation. which allows her to see the results of each conversation option and its effects.  She wastes a lot of time doing this, but she also probably has a better understanding overall.  I will, on the other hand, play the first time through just as I want.  As I always play “nice” when a character’s morality is measured, it’s fairly easy for me to distinguish what my character would say.  In all of the games, this wins favor with some while others find my do-gooder behavior tiresome.

In keeping with the idea of conversation, there’s lots of it!  This is something I truly appreciate, and Dragon Age as a series has never failed in this.  You can make quite a bit of conversation while in camp, but one of the best additions was the added supplementary conversations while you’re just walking around.  I became rather partial to who I kept in my party because of this; Dorian, Blackwall, and Sera seemed to be the most talkative and some of the things they talked about…so much fun! 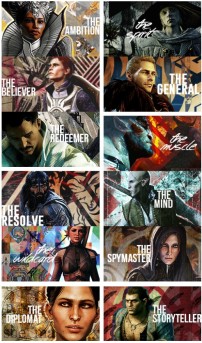 I’ve started playing the Mass Effect series, also from Bioware, and with the confirmation of a game 4 due out next year, I’m hoping they take a cue from Dragon Age in regards to the romances; conversations, scenes, options.  With Inquisition, Bioware raised the bar.  Romance options are not only based on race, but also sexual orientation.  In the previous games, there were characters that could be romanced specifically by either a male or female lead, some by both, but this time around, there were more lines drawn.  Dorian is gay, as is Sera.  Solas can only be romanced by a female elf.  Commander Cullen, an NPC, is (luckily) a romance option who can only be wooed by a female human or elf.  This approach, in addition to creating a transgendered character found in Iron Bull’s party, has garnered Bioware a great deal of praise and plenty of accolades including a Special Recognition Award from GLAAD.

Here is the lineup: Your advisors are Leliana, Josephine, and Cullen, all NPCs, but of which two are romance options.  I would include Cassandra, a warrior, as well since she’s with you from the very start and initiates the Inquisition.  Along your travels you can recruit the following: Varric – a dwarven rogue, Solas – an elven mage, Blackwall – a human warrior, Iron Bull – a Qunari warrior, Dorian – a human mage, Sera – an elven rogue, Vivienne – a human mage, and Cole…he’s a bit of a complicated rogue.

What you’ll realize is that these characters are 3-dimensional, and this is a great lesson for us storytellers!  There is diversity, and passion, and spirit, and those make for good characters in any medium.

As I’ve rambled, yet again, I’ll wrap it up.  Goodness, I almost need to do another post on this topic alone.  The politics in the game surround a mage/templar conflict.  The companions you recruit all have their own backstory and ideas on how this problem should be resolved.  Because of this conflict, I chose to play my first time through as a female human mage.  Most characters and even NPCs will have their viewpoints and will treat you accordingly until you “win” them over.  There’s fear and skepticism, conflicting religious ideology, political intrigue, and so much more.  As you move forward, making decisions, and influencing the people around you, you will find that this is a fully fleshed out world where your choices have consequences and can shape the world around you.  Again I say, “It is so much fun!”

If you decide to play and want to know your romance options, here’s a guide from IGN.

I hope you all had a wonderful weekend!

One thought on “The Dragon Age Obsession Saga Continues…Part 3”